80-years, and still in love

Jack and Joan’s secret to a long marriage is Jack’s patience and his habit of turning his hearing aid off. Jack is 102 and Joan is 100, and although Joan claims she would be a millionaire if she really knew the secret to an 80-year marriage, staying silent and letting her have her say seemed to be Jack’s.

ITV’s This Morning sent Lisa Snowdon to meet Mr and Mrs Bare on the event of their Oak Anniversary. As a gift, for such a special occasion, Ms Snowdon presented Jack and Joan with a Winchester Teak Single Oval Garden Bench from Sloane and Sons. As Joan said, it was “the perfect gift”, as everyone in the care home can now enjoy the seat wherever it is placed in the grounds.

Jack and Joan first met at a cycling club. Both were keen cyclists, and they joined the club on the same night. Jack says it was love at first sight; Joan said he grew on her. She got used to him over time. They would cycle miles together, sharing their passion for the outside. With little money for going to dinner or having dates, they got to know each other on the road.

Since the end of World War II, they have never spent a night apart. Daughter, Gill, (75-years-old) claims to have never once heard them argue. Although the couple seems to suggest they did have disagreements, with Joan and her fiery temper, they showed a united front when it came to their child. This is a couple with an enduring sense of love and decency. 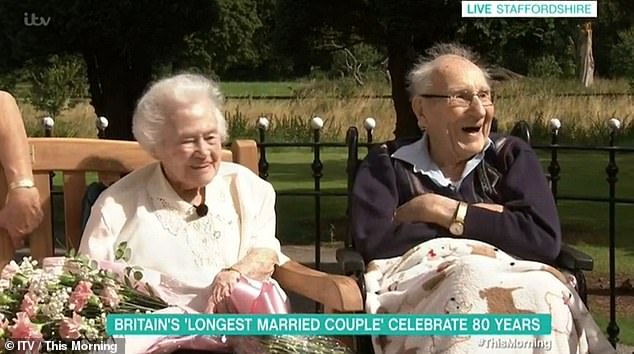 Images from the Daily Mail

The Bare’s celebrated the occasion of becoming the UK’s longest married couple with a party at Springfield House, near Wolverhampton. There was lots of prosecco at the celebration, leading to a bit of a memory lapse for Jack about the whole affair. The fizz flowed, and there was an appropriate amount of cake.

Every year, Jack buys Joan pink carnations for their anniversary, as these were the flowers in her bouquet when they married. This year was no different, as Joan was presented with a beautiful bouquet.

How do they do it?

The question everyone must be asking is “How?” How do you stay happily married for 80-years? The connection between the couple is clear; the happiness they share, and the smiles were genuine. When asked for advice to pass on to people starting out, the answer was “patience.” Joan was clear that Jack’s patience, and the fact that she learned to control her temper, meant that the couple withstood the test of time together. Even though this suggests that the secret is endurance, the truth is more in the connection they shared even after their 100th birthday.

The ‘This Morning’ team seemed genuinely in awe of the couples’ love. With words like “inspiring” and “cute”, they were rightly given the spotlight. They achieved this fantastic record by being together for so long. Lisa Snowden seemed more than keen to learn some lessons for keeping her relationship happy and healthy!

And the “perfect” gift

It is strange when you reach 100 and 102: what present can you possibly buy? Joan noted that she did not need anything now; she had everything she needed. Although the pink carnations were lovely, she saw those as the marker of a tradition. So, when it came time to buy a gift for a couple of 80-years what better than a wooden garden bench.

Think of the symbolism that the beautiful two-seater, crafted teak Winchester bench offers. It is a place where the two can just be. When you have been married for so long there is no need for words, the company of the other is enough. Therefore, placing the bench in the countryside around Springfield House, in a favourite spot, is just the best way to celebrate their togetherness.

Joan’s declaration that is was the “Perfect gift” goes to show that even at 100 years old, there is something out there that can make you feel special. She declared it was “Lovely” and noted that everyone in the home could get something wonderful from spending time sat on the garden bench for two.

Adorned with a gold plaque to mark the occasion, the Winchester Sloane and Sons bench will be an enduring reminder of the love story between Jack and Joan.

Anna is the marketing and office manager for Garden Benches – a premium supplier of high-quality wooden benches and other outdoor furniture.

Anna is the marketing and office manager for Garden Benches - a premium supplier of high-quality wooden benches and other outdoor furniture.